How to Approach Treatment for Torn Ligaments 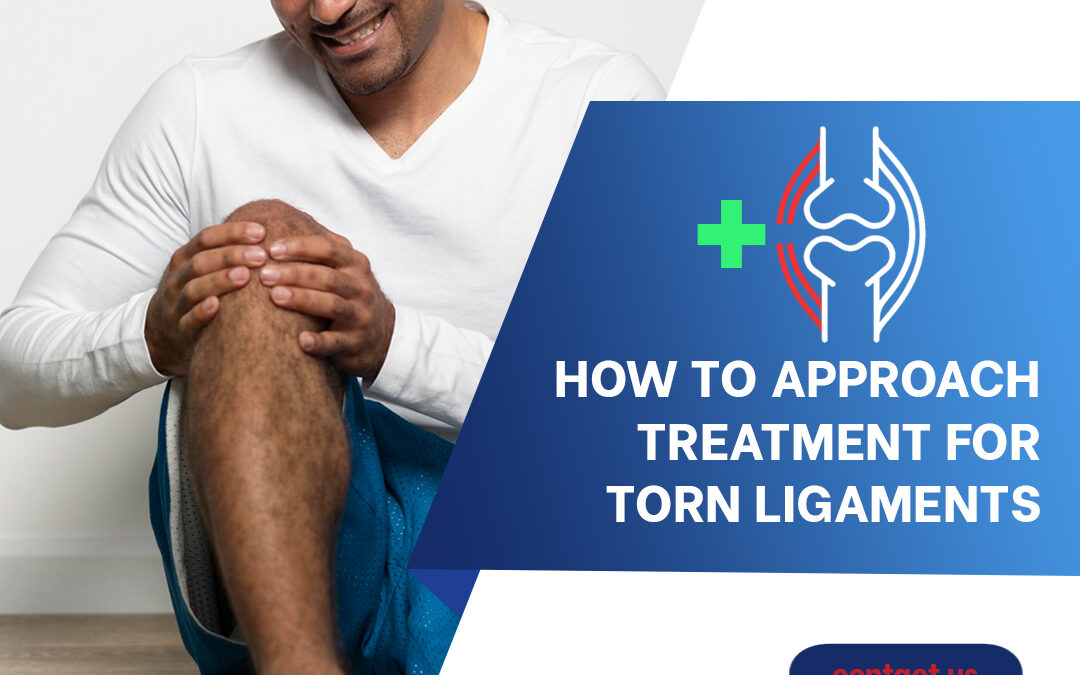 In addition to the swelling and pain they cause, torn ligaments can also cause mobility problems that interfere with work, family time and leisure activities. Due to the nature of the injury, prompt treatment is often required, up to and including surgery to repair the torn ligament. To avoid reinjury and long-term damage to surrounding joints, it is critical to commit to take your treatment seriously and become a committed part of the process.

The following guide is intended to help you become a more informed patient about torn ligaments and the available treatment options. If you have any questions or would like to learn more about Outpatient Joint Replacement Center of America (OJRCA) please don’t hesitate to reach out.

How Do Torn Ligaments Develop?

Ligaments are tough yet flexible bands of tissue that connect bones together, particular in major joints such as the knees. Although similar to tendons, ligaments connect bone to bone, while tendons connect muscle to bone. As tough as the ligaments are, sudden trauma, high impact twisting or untreated sprains due to repetitive motions can all cause torn ligaments to occur.

One very common location for torn ligaments is in the knee. This is because of the high degree of stress the knee joints undergo during normal movements, combined with its need to be highly flexible. In addition to enabling normal bending and flexing of the knee, the four knee ligaments also allow for slight rotation and lateral movement. This in turn facilitates complex movements, such as pivoting, that are often used while playing sports or performing work.

ACL tears are one of the most common types of torn ligaments, and it’s an injury with which most people are aware. This often occurs when the knee experiences a sudden twisting movement, such as when the foot is planted firmly but the knee suddenly moves in another direction. Because of this, football, hockey, skiing and basketball are some of the most common sports where patients develop ACL tears.

The PCL is more often injured or torn by injuries that cause direct, sudden force, such as during a car accident or a blow to the knee.

Another frequently torn ligament in the knee is the MCL, which can be injured during contact sports that cause an impact to the outer knee. The LCL can also become injured, but occurs less often due to its location on the outer aspect of knees.

The most telltale sign of a ligament tear is a sudden popping sensation during physical activity that is usually accompanied by swelling and pain. Another common symptom is buckling in the knee and an inability to carry weight.

Anyone experiencing any of the above symptoms after sustaining a knee injury should seek immediate medical attention. Torn ligaments generally require prompt treatment to ensure the best chance of healing. It is also important to rule out other injuries, including a broken bone.

To diagnose the source of knee popping, swelling and pain, doctors will generally perform the following steps:

In some cases arthroscopy may be used, which involves inserting a small camera into the knee that allows doctors to see a more clear picture of the extent of the torn ligament. This can help determine if surgery to repair the ligament is needed, or if it can potentially heal on its own.

Torn ligament treatment depends on a case-by-case and ligament by ligament basis, according to factors such as weight, age, previous injury and extent of damage. If it is believed there is a chance that the torn ligament can heal by itself such as is the case with most MCL sprains, conservative treatment and rest will be recommended. Commonly recommended options include:

In cases where the tear is extensive and cannot heal on its own, or if the torn ligament is not responding to conservative treatment, surgery to repair the ligament may be recommended as is frequently the case with ACL tears when the knee remains unstable after physical therapy.

ACL ligament repair surgery usually involves accessing the torn ligament and replacing the damaged tissue with healthy tissue. A common source of donor tissue is part of the tendon from the kneecap or hamstring on the back of the leg. This can either come from the patient, which is known as autograft, or from a donor, which is called an allograft.

Surgery to repair the ligament can be performed using minimally invasive techniques and an arthroscope that allow for an outpatient procedure. When recovering from torn ligament surgery, physical therapy and rehabilitation is important to helping regain strength and stability in the knee and helping the torn ligament fully heal.

Injuries such as torn ligaments can also increase the risk of serious joint damage and posttraumatic arthritis, a form of the joint disease that is associated with frequent or serious injuries that increase stress on the joints. Extensive joint damage in the knees that causes pain and mobility problems that do not respond to conservative therapies may require partial or total knee replacement.

Reach out to OJRCA Today
To learn more about treatment for knee pain related to injuries such as torn ligaments, contact OJRCA today. Our caring and dedicated team is committed to personalized treatment plans designed to get people back to a healthy and active lifestyle.

Get in touch with us